You are here: Home / Golf Tips / Draw Vs. Fade – Every Golfer Must Know The Details Of These Golf Shots

When golfers swing their golf club to strike the ball towards the targeted hole, they throw it straightly. But it does not happen all the time. Sometimes, the ball passes the way to the right or left instead of the upright position. The shots that don’t end as the golfer’s expectation and make a different flying shape are usually called a draw or fade images. It can happen not only by beginners, amateurs, or recreational golfers. A pro can also face this kind of situation. This article tries to determine the differences between these two types of shots and other details. 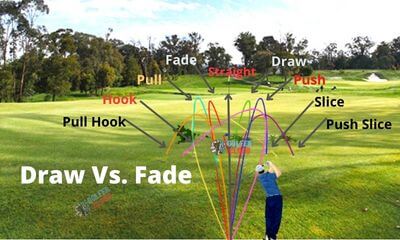 What is a Draw?

A draw is a shot that makes a curve at the left side while passing the distance towards the dogleg hole. It usually happens when the players lose control of the driver while hitting the ball with the clubface. For right-handed golfers, the ball makes the curve from right to left and just opposite for the left-handed golfers. The wild swing is not the only cause; the launch angle, ball speed, and spin rate are also responsible for the type of shot shape.

What is a fade?

A shot starts with a straight line but changes its passing line slightly right from the left and falls on the right-side of the ground. This type of golf shot is usually known as a fade. It tends to fade when the clubface angle remains slightly open on the swing path. It may create an iron or driver swing. However, it makes a shorter distance than a draw, but it is not significant to consider.

How to hit a draw?

There are many club swing techniques you can easily make a draw shot. You have to follow the proper stance while aiming for the trial.

How to hit a fade?

Usually, golfers want to avoid slices of the ball that make a disaster on their swing practice try to make a solid fade shot. At first, you have to realize that you should keep your clubface angle slightly open to pass the ball 3 to 10 yards right from the line of the target. So if you want to create a fade, you have to follow the below steps.

Fade vs. Draw – Which is better?

There are different opinions on the importance or significant effect of the draw and the fade shot among golfers. Both club swing shots feel better for an extra level of skilled golfers. Some golfers gain with the appeal, and some on the fade. So it is tough to say which one will be perfect for winning a round or tournament. If you look at the legend golfers, everyone has their opinion or advice for both kinds of golf shots. However, which shot allows you to lower your score mainly depends on the golf course conditions you play.

The Augusta National Golf Club, the home ground of one of the majors, “The Masters,” has the favorable condition for a draw shot on the 2, 9, 10, and 13 holes. Only the 18 holes offer a better result for a fade shot. The famous golf legend Lee Trevino says, “If you want to win Majors, a fade is a shot.” But he never won in the Augusta. On the other hand, the “power fade” Jack Nicklaus wins six times on the Augusta. However, he advises the novice to start with the draw spins, not with a fade shot. You can switch on the fade after getting consistency with the draw shots.

The present renowned golfer, Tiger Woods and Rory Mcllroy, get success on fade shots. Another legend, Dustin Johnson, switches to fade from the draw shot to lower his handicap. Conversely, Martin Kymer is struggling for both fade and daw shots. Therefore, which shot you should start or succeed in ultimately depends on your swing style and patience to adopt the proper swinging techniques.

Distance Difference between Fade and Draw

Generally, the swing distance of the draw shot is more than the fade. But the question is why draws pass more yards than fades where golfers use the exact driver for both golf shots. When golf researchers go further with the difference, they found that these two types of swings in a controlled environment give the same result. In contrast, it is not possible to get controlled surroundings when players make their swing on the natural golf greens. After that, the researchers found that some unique factors significantly affect the carry distance for fade and draw. These factors are – Spin axis, Spin loft, Spin rate, Club speed, Club path, Attack angle, Smash factor, and other environmental issues like air flow rate and direction. Here we make a comparison table on the average distance of draw and fade based on these dynamic affecting issues.

Besides, we found that the heel side design of the clubface substantially affects the spin rate in both fade and draw, resulting in different carry distances.

What happens while making the draw and fade shot?

When a golfer aims for a draw, he makes the club’s straight path slight out the right side, and the clubface creates a relatively more minor angle of attack to the swing path at impact. So while the player strikes the ball, the ball flies with a negative spin axis, creating fairway curves to the left. Conversely, the club path stands out of the left at a fade shot, and the clubface remains more open. So after hitting the ball, a positive spin arises that turns the ball to the slight right of the golf swing path.

We hope the information we discussed on fade and drew shots in golf can fulfill your query. You need to follow the right way to make these two types of golf shots and deeply analyze your score for both. Analyzing your successful trials’ scores helps you decide which one you should go to with your swinging style. If you want to know more about legendary golfers’ and golf instructors’ results and opinions, you can read another article on golf forums. In that article, you will get more information about golf forums where expert golf writer gives their advice and share experiences for beginners and golf lovers. So it’s your turn to enhance your knowledge of golf.