After manufacturing the hybrid golf clubs in 1990, the argument for their importance, necessity, and use of the same iron-type started among golfers. Perhaps, these hybrid clubs term to rescue clubs. Most average handicappers think they should replace at least one iron with a hybrid club, mainly for long iron like a 5-iron, because the golf association restricts 14-iron in the tournament. But the preliminary difficulty arises among amateurs who still can not decide when to pick a hybrid instead of iron. However, the manufacturers give the number of the hybrid clubs more or less equivalent to iron clubs. We try to draw out a significant difference between 5-iron or long iron and 5-hybrid used for golfing. 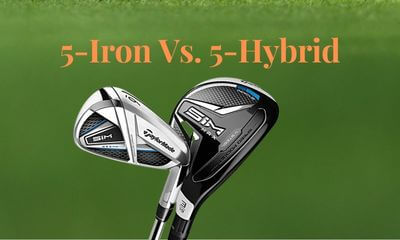 What is a 5-iron golf club?

A 5-iron club belongs to the mid-iron category and has a comparatively thinner metal clubhead than its hybrid version of rescue club.

The mid-iron is usually used at the fairway, semi-rough, and rough, actually at an uphill course where it is more accessible to stop the ball to get the unexpected trajectory. It is also essential to know how to hit with a 5-iron for controlling the ball’s speed when the player wants to get a long approach shot. The golfers have a faster rate and can consistently hit the ball; the 5-iron is better than a 5-hybrid.

The 5-hybrid club has featured in the same category of irons and fairway woods, like 5-iron 5-wood. The numbering procedure is the same as the other fairway wood club carries in the golf bag. Hybrid clubs are mainly produced for the avid golfer who does not get high ball’ trajectory with their traditional iron clubs. But due to more forgiveness, the hybrid clubs become famous for replacing irons among those trying to lower their score and want to get accurate distance and speed of the striking ball. Besides, the low center of the hybrid’s gravity helps the beginner golfer get more trajectory than the same iron. And you can easily add 5 to 8-yard distances more with the hybrid club. The player with slower ball speed consistently gets the ball rolled back off the golf green with a 5-iron, then replaces the iron with a 5-hybrid club.

However, the right shot depends on the golfer’s experience and skill level; the clubs’ features for striking the ball also contribute to success. The perfect distance and ball trajectory depend on the launch angle, swing speed, ball contact on the clubface’s sweet spot, etc. Besides, the clubs’ forgiveness creates a significant difference in the tee shots’ results. If someone gets varying results for trajectory, carries distance, controls the swing, and rolls out with the iron, they should replace it with a hybrid. The factors that differentiate these two clubs, 5-iron, and 5-hybrid, should be considered before returning them.

Generally, there is no standard scale of loft angle for the clubs. The manufacturers decide to set different angles as the experience they get from their experiments. If you want to replace your iron with a hybrid, it would be best to replace it with more or less the same angle. In this sense, you should take a 5-hybrid at 24 to 27 degrees loft angle when you want to exchange your typical 5-iron loft having an angle between 28 and 28 degrees.

The standard length is a crucial factor because it affects the effectiveness of the ball speed. Usually, male golfers use 37.5 inches steel shaft 5-iron or 38 inches graphite shaft. At the same time, women golfers pick less than one inch shorter stick than the men golfer. Therefore, it will be wise to decide if you carry the same length hybrid or more than ½ inch difference with the iron counterpart you used before.

The 5-iron clubhead crafts with metal elements provide a little more weight than the exact size of a 5-hybrid. This chubby clubface lowers the average swing speed, which impacts the ball flight. Alternatively, it creates slower swing speeds at approximately 80% of any golf driver’s speed. Male golfers can make faster swings with 94 miles per hour in any PGA tour, and a lady golfer can strike on 79 miles per hour with this metalhead 5-iron club.

That’s why most club golfers try to pick blade type 5-iron, which has a slimmer and sleeker shape and helps the pro produce more skilled swing shots. On the other hand, the 5-hybrid has more or less the same quality clubface as different hybrids. However, the Centre of Gravity point at the front side allows the player to solid contact the golf balls to get a reliable clubhead speed.

We know that the producers put the hybrids’ numbers the same as the iron clubs’ numbers because golf hybrid introduced to golf as the replacement club of golf irons. For example, 2-hybrid replaces a 2-iron and similarly 4-hybrid for a 4-iron club. Golfers should know both golf clubs’ types before googling for the difference between a 5-hybrid and 5-iron club.

On the PGA website, Ricky Martin, A PGA Professional, states that hybrids’ deeper and lower CG point helps get more carry distance. Generally, gofers get a little more carry distance with the golf hybrid club while using the same number as an iron club. And sometimes, the length may be 5 to 8 yards more. Still, the club swing length varies for both men and women golfers due to the variation in swing strength. Below we state the table of hybrid and iron distance charts for both lady and men golfers.

Among these two types of golf clubs, there have substantial differences in the driving range of golfing. However, most club golfers keep the same size and shape of 5-iron or 5-hybrid to overcome striking problems that may arise for any uncomfortable situation. The considerable differences between them are as follows.

The 5-iron golf club produces a lower ball’s trajectory that helps the ball go under the tree from any rough. The 5-hybrid gives a comparatively higher ball trajectory that makes the flies into the trees. It also provides more control and stopping capacity, whereas the iron shots tend to more rolling of the ball after landing to the green.

The Low Center of Gravity of the 5-hybrid clubface helps beginners and intermediate golfers create more accurate shots than 5-iron shots. But the professional golfer gets a more reliable shot with the 5-iron that is relatively longer clubs in their bag.

Generally, the club’s number and loft significantly impact the carry distance difference. With a 5-iron golf club, a PGA tour golfer can achieve a distance between 195 to 205 yards, and the LPGA average player can get 170 yards. On the other hand, they all get more minor distance gaps while using a 5-hybrid golf club.

The 5-iron makes relatively low shots than a 5-hybrid that helps the ball pass under the tree and branches. On the other hand, the 5-hybrid creates a higher air flight of the ball and more control of the swing speed.

However, the 5-hybrid is an excellent choice for the mid-handicapper in their practice session. Generally, the average golfer faces a minor problem on launch monitors if the weather is intense. In that case, they lose control of the ball’s speed as it flies higher. But as the 5-iron golf club shot flies comparatively lower, it does not trouble to carry distance and control over swing speed. So which club you will carry in your bag mostly depends on your skill and choice. But if you want to replace your iron, it will help take the same length, loft, and number of a hybrid golf club.